Daria Kasatkina is an enigma, at least for players who expect pace, rhythm and control. Caroline Wozniacki is one such player. Monday, she succumbed to the creative nature of the 21-year-old’s game, losing her chance to advance to the quarterfinals and take a crack at what could have been her second major title of the year.

“She’s got the swagger,” Martina Navratilova said about Kasatkina on Tennis Channel.

Kasatkina’s advance to the quarterfinals of Roland Garros is her first at any major.

“It means a lot, of course,” Kasatkina told the press later. “It’s my first quarterfinals in the Grand Slam. But, already, I have to forget about it because I’m playing already tomorrow.”

“I honestly didn’t think I played badly this morning,” Wozniacki said later. “She didn’t miss one ball, and she was playing very close to the lines. I was trying what I could, but it just wasn’t enough today.”

Before the match was called for darkness on Sunday, Kasatkina had the edge. She had won the first set and the second was tied 3-3. But the odds pointed toward Wozniacki early, especially when Kasatkina started with three double faults in her opening game and Wozniacki served for the first set up 5-3.

“I was happy to stop,” Kasatkina began. “It was already dark. I was framing a lot of balls, and I was getting really tired because first set took a lot of energy from both of us. I was happy we finish on the 3-all in the second.”

Their time on court Monday went by in a flash.

With only one title on her resume — Charleston, 2017 — Kasatkina, who is called “Dasha” by those close to her, scored wins over Venus Williams, Angelique Kerber and Sloane Stephens at Indian Wells this year. The march through that draw took her to the final, where she lost to another young star, Naomi Osaka. That loss kept Kasatkina from notching a spot in the top 10.

During the spring clay-court season, Kasatkina continued her rise. She arrived at Roland Garros with a 10-5 record. In Rome she lost to the eventual champion Elina Svitolina in the third round, but scored an upset over Garbine Muguruza, the 2016 French Open Champion, in the previous tournament in Madrid. (She lost in the quarterfinals to Petra Kvitova.)

Kasatkina’s favorite surface is red clay and Roland Garros is her favorite tournament. That love was etched in her mind in 2014 when she won the Girls Junior championship. This year is only the second time she has been seeded in Paris (14).

“Feels really great,” Kasatkina said, when asked about her reaction to praise heaped upon her by Fabrice Santoro, two-time Australian Open doubles champion and mixed doubles champion of Roland Garros in 2005. “When the guy like this, unbelievable player, saying something to me in front of all the crowd, for sure, it means something.”

Wozniacki had not lost a set before this fourth-round match. Her only previous encounter of resistance came from Danielle Collins in the opening round. The American stretched the first set to a tiebreak, then Wozniacki rolled to snatch the win. She dropped a total of three games the next two rounds. Her match against fast-serving Georgina Garcia Perez lasted 51 minutes. 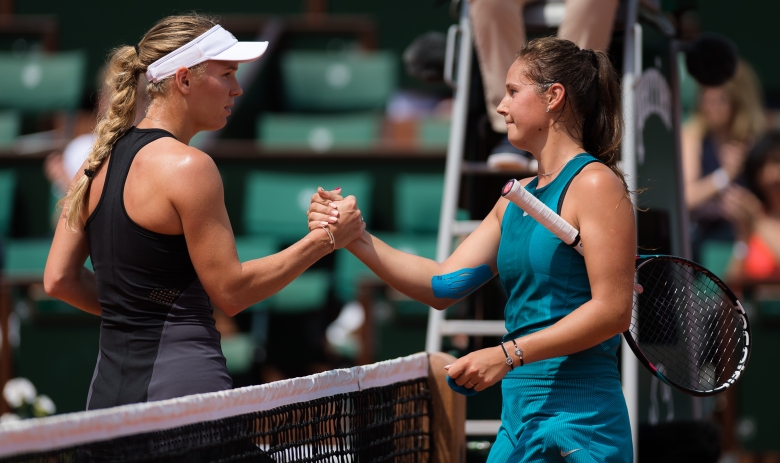 Wozniacki’s overall record on clay doesn’t speak well of her top ranking. Her last title on the slippery stuff was Brussels in 2011. However, that record is not why she lost to Kasatikina.

“Kasatkina is a really touchy, feely player,” Navratilova said. “She can do it all.”

Wozniacki, at 27 and with 27 titles for her career, wants pace. She wants the ball to come to her racquet so she can redirect it. That doesn’t mean she doesn’t hustle because she does, being one of the most athletic players on tour. It means she needed to be creative, which is the trump card in Kasatkina’s deck. Her intuitive nature is mysteriously wonderful to watch.

“She takes pace off the ball, rolls in serves, and varies [her] pace,” Navratilova added.

Forty percent of points during the match went nine shots or more, according to Tennis Channel.

“That’s almost twice the number of points on both the ATP and WTA,” Navratilova emphasized.

Wozniacki is fit-as-a-fiddle, so longer rallies should not have bothered her. But Kasatkina knew how to lay a trap for the Dane throughout Monday’s resumption of this encounter. Kasatkina hung in the crosscourt rallies, luring Wozniacki by edging her closer to changing the ball’s direction or dropping it short in Daria’s court. As soon as that happened, she’d spank a winner down the line. The strategy seemed routine; her posture appeared nonchalant.

“Today was really not my day,” Jelena Ostapenko said, after losing to Kasatkina in Charleston last year. “I just didn’t feel the ball that well, and I was missing too much, and because she was only defending during the whole match.”

Ostapenko went on to win Roland Garros last year, smacking the life out of every ball she hit during the fortnight. Yet she, too, realized that Kasatkina’s game on clay was dangerous, although her comments seemed to blame the Russian for defense rather than a superior offensive strategy.

Calling her win over Wozniacki an upset would be inaccurate, given their head-to-head. However, it is a warning to all those women who live and breathe baseline bashing. That strategy could cause problems for Kasatkina when she faces Sloane Stephens in the quarterfinals, especially if the weather is sunny and warm. The clay would dry and turn the court into something close to a hardcourt. American tennis observers know that Stephens, being an American raised on hardcourts and the winner of the 2017 U.S. Open, flourishes on that surface.

“For me, actually, it’s not really natural to hit the lines with aggressive shots,” Kasatkina said. “Normally I’m just, like, to run and bring the balls back. But, as I said, women tennis become very powerful. I have to get used to it and try to not only running but also create something with my game, with my shots. If you want to win, you have to adapt.”